Love stood at the alter waiting for Truth to walk down the aisle.
Posted by Perry at 6:28 AM No comments:

Love has a fabric unknown to you and I,
It's tapestry is woven throughout creation,
Infinite it is, bound it is not.
Your imagination can never grasp its total,
It will forever keep you engaged.
Love is not boring,
Love is adoring,
and will keep you wanting more.
It will get the better of your conscience,
like a fox, you will see loves tail whip around a corner,
And you will run after it with delight and curiosity,
Where did it go now you say,
Let
Me
Find
It
And seek you shall
And find you will
And with it you will grow
And with it you will know
The
Creator
Has
Always
Been
God

I only worshipped blood

Family,
O Family,
how narrow was my mind,
how short I laid my sight,
I only worshiped blood my Lord,
a belief I held on tight.

Family,
O family,
how sorely misunderstood
thicker than water I believed,
for I only worshipped blood

but now my life has ended,
and I stand on elysium fields
I look across the lawns kinship
for love has been revealed

my sisters, my brothers,
now washed of all the mud
I regret that I had starved you love
for I only worshiped blood

i couldn't see,
it couldn't be,
for she did everything for me
bite the hand that fed to me?
Are you suggesting that she, she...

i slump slowly to the ground,
i'm in a corner
my back against an old, bare, worn-out grey brick wall
the vagabonds home.
as I slide down my jacket rides up my back nearly over my head,
leaving the skin it was protecting
exposed
feeling the cold of the bricks shudders short sharp gasps in my body
huh
huh
huh
my legs stretch out and fall apart, my feet surrender outwards, and my eyes gaze upon a spot in between them.
my palms lay flat on a thin layer of settled snow, my pale blue fingers spread apart,
searching
for
support.
where is the ground?
oh there it is,
as the snow makes my bum wet.
i'm collapsed on frozen concrete and I feel my weight
i'm heavy
but I'm too startled to move
and in any case
i know now
its time to stay still
however uncomfortable
its
time
to
stay
still
and
feel.
my chin falls to my chest
i'm exhausted,
i'm exhausted.
i'm exhausted.
i exhale a long breath of air
haaaaaaaaaaaaaaaaaaa!
a cold and misty fog suspends around my face
the war is over,
the war is over.
the war is over.
the
truth
sets
in
and I feel
confused
violated
abused
left
abandoned
manipulated
shame
grief
grief
grief.
she she
she was there for me
but
not
there
for me
my needs full filled
but
my
needs
not
met
is everything ok in there little boy

eye
to
eye
i see you

ear
to
ear
i hear you

heart
to
heart
i feel you.

in the distance I hear the faint sound of an ambulance

i couldn't see,
it couldn't be,
for she did everything for me
bite the hand that fed to me?
are you suggesting that she, she...
and
all
this
happened

the principal of preclusion

does science not say that two or more identical fermions cannot occupy the same quantum state within a quantum system simultaneously.

does spirituality not say that Truth cannot enter a point in the soul where there is Error already present.

Written on your face

Said one man to another, "I'm going to say a sentence and I want to see if you can tell if I'm lying or telling the Truth".
Said the other, "ok".
Said the man, "Yesterday, when I came home from work I stopped by the tavern for a tipple of brandy".
Said the other, "You're lying!".
Said the man, "You're correct, but how on Earth could you know so quickly?"
Said the other, "You paused before speaking, and in that hesitation you sculpted a lie".
Said the man "You clever wit. Lets try again, but this time, I will not utter, I'm just going to think of the sentence and that way you cannot tell if I'm pausing". The man stood still and without speaking, nodded his head to acknowledge he was now thinking of the sentence. When he was done the man nodded his head once more and said "Ok, was I lying or telling the Truth?".
Said the other "You were lying!".
Said the man, "But how is that possible? What are you? A reader of the mind".
Said the other, "I am not a reader of the mind, but I did indeed interpret the flickers in your eyes". Said the man, "You sneaky devil. Ok, you got me twice, but you cannot possibly catch me out thrice for I have a grander idea. I'm going to do it again but this time not only will I just think of the sentence, I am going to turn around so that you cannot see my eyes". The man slowly turned his back, and then abruptly held up his hand to instruct that he was beginning to think of the sentence. When he was done, he cast down his arm and turned 180 degrees. Upon facing the other he said, "Was I lying or telling the Truth?".
Said the other, "You were lying!".
Said the man, "Damn it, I'm flabbergasted, you guessed correctly by and by, how could you fathom such a thing, are you a magician? You couldn't hear my voice falter and neither did you witness my eyes. Please... tell me your secret!"
Said the other, "Oh, it wasn't difficult. Before you turned around I counted Seven wrinkles upon your brow, and when you faced me yet again I simply counted Eight wrinkles - you see, the Truth was written on your face"
Posted by Perry at 12:31 PM No comments:

The life as they knew it was shattered,
...the veil was lifted,
and the world stood still like startled stalagmites, mouths a jar in disbelief,
"How could we have never... kno-wn" they stumbled.
But those who passed from yester years did not stumble or wade in disbelief.
They did naught but run and smile with open arms,
Truth and Love pursued their message, "Alas, we have waited so long for you to see us, now you must believe and now you will not fear "
And in that moment the stalagmites melted as their loved ones from bygone held their hands.
Posted by Perry at 2:44 AM No comments:

Black can never mix with White in the presence of Love and Truth.
Posted by Perry at 8:33 AM No comments:

The Truth shall set you free 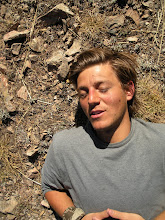